Plan of the Athenian mansion of the Masses family, by Carl Haller von Hallerstein (1814).

The floor plan of the mansion’s upper story places it in the class of urban noble house that dominated Ottoman cities already from the middle of the 17th century and lasted until the early 19th century, both in the Balkans and in Asia Minor.

The konaki, as it is called, imparted prestige and security to its owner. It is often a labyrinthine compound, of which the upper floor is mainly timber. Stone walls delimit two or three sides of the building. The two main components making up the floor plan of the upper story is the room unit, the ontas, and the semi-enclosed transitional space, the hayiati. Additionally, the konaki had a court that favored outdoor life on the interior of the house; it was surrounded by a high wall that protected the owner’s privacy and closed it off to strangers. Roofs with wide gables crown these richly voluminous buildings, while series of windows and skylights dissolve their façades. 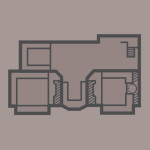 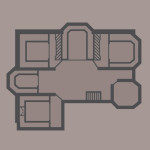 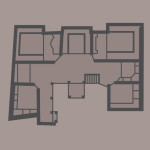 Characteristic plans of mansions with hayiati and ontas, from various regions of the empire.

This type of house form was adopted by the social elite of the Ottoman Empire, including the provincial aristocracy, regardless of local customs, or religious or national affiliations. It constitutes a transnational mansion model that is transferred from the center to the most remote corners of the Ottoman empire and becomes grafted to local tradition. This architecture became the frame for the life and creativity of the rising urban class of the period. 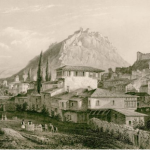 A Street in Smyrna, by Thomas Allom (shortly before 1834). 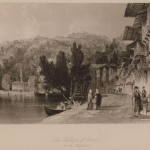 View of Chela on the Bosphoros, by Thomas Allom (shortly before 1834).

Athens had numerous houses of this type already by the second half of the 17th century, as in an oil painting by Jacques Carrey (1674) depicting the visit of the Marquis de Nointel to the city, numerous houses with hayiatia on the upper floor or with successive series of windows and skylights are represented. Similar evidence comes from the Venetian officer Giacomo Verneda in his 1687 depiction of the bombardment of the Parthenon by Morosini.

An interesting aspect of this architecture is the flexibility in function of the household equipment (furniture, carpets, utensils, etc.): the bedding that was used for sleeping was removed in the morning to the partitions; kilims and the various small furnishings met a variety of needs. For example, the sofas were used as seats but also as beds, while the large copper trays also served as tables. This matter is mentioned by J. Millingen regarding the houses of Messolonghi in 1823: “In Mesolongiot houses beds, tables, and chairs, are in vain looked for. The divan is a substitute for them all. This consists of mattrasses and pillows, stuffed with wool, arranged on a raised portion of the floor all round the room.” 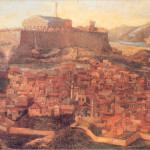 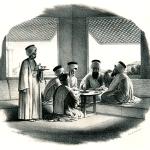 Scene of everyday life in the voevodalik of Athens, by Louis Dupré (1825). 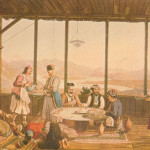 Dining at the house of the Bishop of Amphissa in the village Chriso, by Edward Dodwell. © Gennadius Library