On Sunday April 10th, another Open Walk organized by the Atenistas took place in Athens. The sixth consecutive OpenWalkAthens, themed “Invisible Athens”, was a little different to the previous ones as the purpose was to take a look at Athens from an insider’s perspective. We thought it important to familiarize the participants with parts of the city which have been in the same place for decades – some even for centuries – that are seen and walked by indifferently, without people being aware of what hides within them.

A versatile map of 17 points was put together, which visitors could choose freely to visit and the citizens of Athens were more than receptive to it. About 10,000 Athenians took advantage of the ideal weather and with their orange maps in hand poured into the streets of Athens. They spoke to priests and rabbis, hat makers, tailors and to members of young and creative teams within the city, to tour guides, porters and architects. The Openwalkers discovered an aspect of Athens that they previously ignored, they discussed with and were briefed by those who knew about the locations in detail and took photographs incessantly. 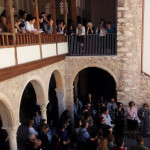 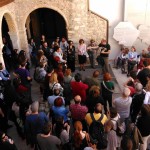 The Training School was followed by 24 young researchers from 11 European countries and 22 Greek participants.

The aim of the training school was to present an overall and a multi-disciplinary approach of a restoration project concerning historic timber structures: the steps, the methodology, the problems, the solutions (final interventions) and generally the dilemmas that arise from the very beginning of a study till its final application (construction works). 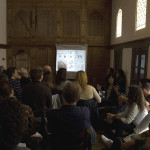 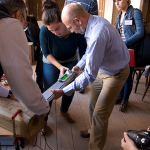 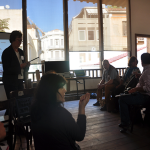