During the period of Ottoman rule, Attica was an administrative region (kaza) with its capital at Athens, a region that already from 1470 belonged to the sancak of Eğriboz (Euripos – Negroponte – Chalkis). The governor of the kaza was the subaşı, who from the 17th century (between 1621 – 1635) bore the title voevoda. The representation of the Christian population, however, and the management of a large portion of its private and public affairs was in the hands of the local elders (proestoi). 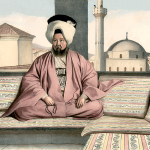 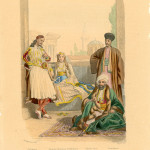 The noblemen of the city are mentioned in sources of the 16th century, without however being named individually. From sources of the subsequent centuries, we know that among the oldest, richest and most powerful noble families is the Benizelos family, a descendent of which was Saint Philothei. During the period when Athenians were resettled in the Peloponnese (1688 – 1691), when the Venetians divided the Athenian colonists into four classes based on the previous socioeconomic situation they enjoyed in their homeland, the Benizelos family was ranked in the first class, according to documents of the years 1690 – 1691. Descendents of the family distinguished themselves throughout the period of Ottoman rule as elders (proestoi), notaries and men of letters, teachers, etc. Members of the family also played a significant role in the Greek War of Independence of 1821.

Distinguished members of the family

The well-known intellectual Angelos Benizelos, student of the important philosopher Theophilos Korydaleas, lived in the 17th century (c. 1590 – 1670). Angelos Benizelos actively participated in the administration of the Greek Confraternity of Venice, occupying various offices (governatore, sindico, etc.) and indeed in 1633 he was elected representative of the Greeks who had settled in Venice from various regions (terre non nominate), among which was Athens. He also taught at the School of the Confraternity (1634 – 1639) and it is likely that he taught in Athens as well.

Ioannis Benizelos, son of Angelos (born c. 1625) was also a teacher, teaching at the Hellenomuseion or Common School of Athens (documented for the years 1676 – 1677). After receiving financial backing from Ephiphanios Igoumenos, an Epirote living in Venice, the School came under the supervision of the metropolitan of Athens and four elders of the city. Another Ioannis Benizelos, author of the History of Athens was a distinguished member of Athenian society during the 18th century. Ioannis Benizelos (c. 1735 – 1807) studied at the Common School of Athens, married Maria, daughter of Dimitrios Kalogeras (who was also from a noble family of the city and was an elder), and taught at the Deka School from 1774 until nearly the end of his life. Benizelos earned the respect of his fellow-citizens, made official speeches in Athens and came in contact with foreign visitors such as the French nobleman Montmorency (1788) and the English traveler and author John Hawkins, whom he hosted in his house for forty days (1796). His work narrates eyewitness accounts of the events of his home town, particularly the era of Hatzi Ali Haseki, with clarity and objectivity.

Ioannis Gennadios (1844 – 1932), diplomat, bibliophile and author, was a descendent of the family on his mother’s side (great grandchild of Ioannis Benizelos, c. 1735 – 1807). His personal library formed the core of the Gennadius Library of Athens. Gennadios was Greek ambassador to London, and among other works wrote an extensive study of the Benizelos family and of Saint Philothei.