Before the mansion there was…

Before the mansion there was…

The mansion of the 18th century was erected over two earlier stone-built structures that were incorporated into the ground floor of the later building. Tradition associates them with the house of Saint Philothei (1545? – 1589), who was a descendent of the noble Athenian Benizelos family. These structures, as evidenced by the traces they left in the walls of the ground floor – beam sockets, cupboards, fireplace – were relatively low tile-roofed houses with a semi-subterranean katoi and a fireplace on the upper floor. During the creation of the 18th century mansion, their height was reduced down to the level of the upper story floor, and they became the katoi of the mansion. 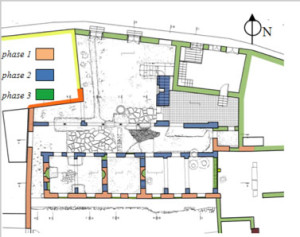 View of the ground floor of the mansion showing traces of the earlier structure.

Evliya Çelebi likely describes similar houses in 1667: “There are a total of seven thousand houses covered with tiles, made like castles, massive buildings, stone-built from the bottom to the top and solid. There are no houses covered with earth, with mudbricks or made of wood. All are houses made with kourasani mortar and lime, with stone walls, solidly built, exceptional houses. Each house has a water cistern. All the rainwater that falls on the roofs and the courts runs through pipes to the water cisterns. In general they are great houses, strong, beautiful, decorated, spacious and most have a garden. All the streets are clean, with sandy soil. There are no stone-paved streets in this city at all, because it never turns to mud…” Two-story stone houses with tile roofs in Ottoman Athens. View of the city by Vincenzo Coronelli (1688). 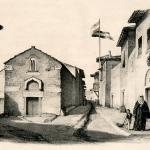 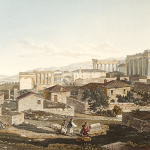 Two-story stone houses with tile roofs in Ottoman Athens. View of the Acropolis by Edward Dodwell (1805/6).